I wrote - well, actually drew mostly - a book on brick bonds for fellow architects and for anyone who's interested in patterns in architecture. Having fallen in love with 19th century brick architecture, my research started by collecting old bonds and than systematize and elaborate on them by computer. Where most brick research focuses on surface, material or stone shape, my study is about the joint pattern. It shows how the brick bond with it's primary stacking order, it's resulting figurative secondary pattern and it's typical corner solutions can be a compositional tool for designers. Small changes in the primary pattern herald the edge, corner or opening. Combined with pure application of the secondary band, chain - or raking sawtooth patterns the bond defines families of dimensions and proportions. In this way the bond relates the dimensions of walls and windows to each other and to the whole building.

The Thrilling Surface draws attention to the beauty and architectural poetics of precise construction from small elements. In short paragraph's a big variety of brick bond aspects coming from very simple principles is shown. Drawings and software will help the designer to work with geometry defining brick patterns in early stages of the design. The book introduces simple row and laying pattern math and perceptual psychology to the brick facade. The survey of the systematics received from the old bonds launches a world of new patterns and new applications. In one way it tries to be the Sense of Order (Gombrich) book for brickwork, in another way it bridges from the old subtleties in masonry towards new robot and prefab techniques. It's goal is to return some of the pattern richness of old town brickwork to modern facades. Brickwork will never be the same.

The first version of the book is in dutch. For a small preview see: www.zinderendoppervlak.nl  or
www.boekenbestellen.nl/boek/het-zinderend-oppervlak for online specs, fragments and sales. 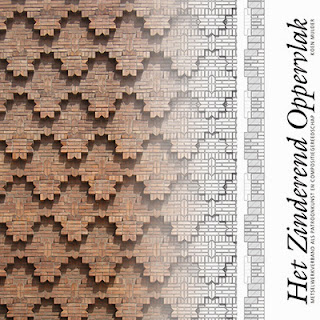 Although it's still only in dutch, the drawings will probably give a good impression of it's scope. There's a google translation button, which might do reasonable for normal text, but it has off course it's limits with respect to technical vocabulary.
Gepost door Het Zinderend Oppervlak op 06:21 Geen opmerkingen: